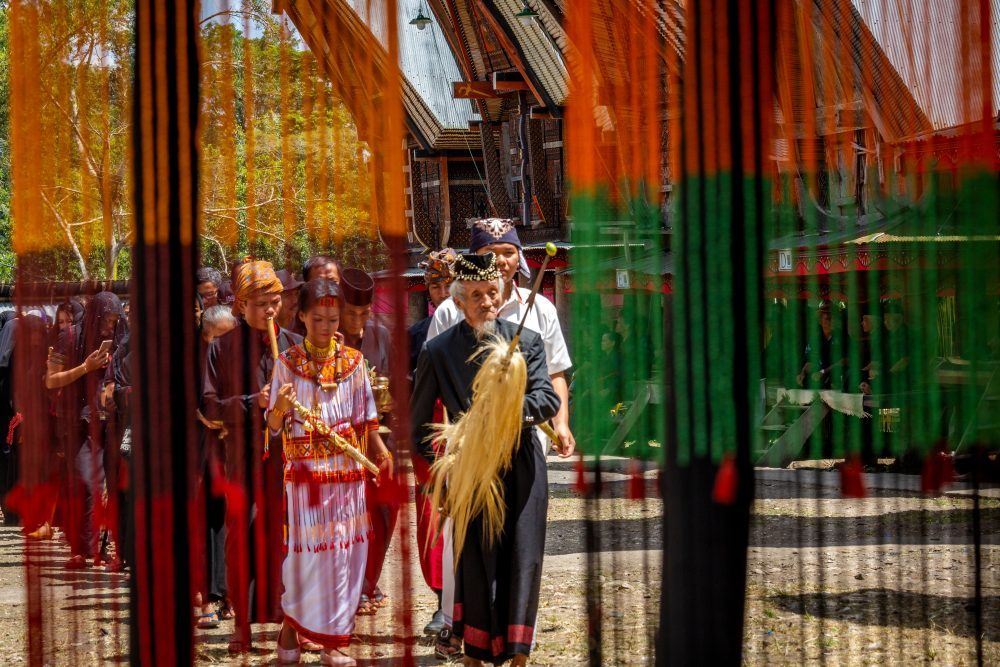 We live in a culture that doesn’t like to think or talk about death, see previous article. Not only is the topic of dying unpalatable to your average Westerner — it’s also something that we don’t allow much time or space for when the event actually happens. In general, the death of a loved one comes as a painful shock. We mostly wear black to funerals, which last about an hour. We hold formal wakes with coffee or cake in funeral homes. Sometimes we might continue eating and drinking and telling stories at a relative’s house.

But some other cultures take this celebration to a whole new level. In New Orleans, where French, West African and African-American culture is blended with a widespread love of jazz, “jazz funerals” are sometimes carried out. The ceremony starts out with a band playing mournful music before switching to an upbeat tune like When the Saints Go Marching In, and mourners dance in a procession through the streets. According to the New Orleans tourism website, prominent New Orleans jazz musician Sidney Bechet once said, “Music here is as much a part of death as it is of life.”

The Toraja people of Indonesia also give their dead a hell of a send-off, treating funerals like a going away party. Locals often save money their whole lives to be able to afford a huge funeral, and funeral celebrations are bigger than weddings. Sometimes the celebration lasts days or even weeks. In Bali — an island with an overwhelming majority of Hindus — the dead are farewelled with a ceremony where their body is on display and regarded as simply “sleeping”, and therefore able to party with everyone else.

Most people are familiar with Mexico’s Dia de Muertos, or Day of the Dead celebrations. Each year, between October 31 and November 2, Mexico comes alive with a three-day party where it’s said that the dead return to celebrate with the living. Mexicans dress up, create sugar skulls and cardboard skeletons, eat food and decorate the graves of the deceased with tissue paper, incense and marigold flowers. It’s so much fun that other countries around the world have started adopting the celebration.

In Ghana, funerals are advertised on the radio and on billboards, and everyone in the community is encouraged to attend. The ceremony itself involves the dead being famously sent off in extravagant “fantasy coffins” that symbolise their passions in life. Coffins might take the form of a fish, a car or even a bottle of Coca-Cola, with the thinking being that this allows the deceased to continue pursuing their passions in the next life.

Madagascans perform a ritual called the “turning of the bones” every two to seven years. Bodies are exhumed, cleaned and re-dressed with fresh silk while relatives play live music, dance and feast. Madagascans believe that spirits don’t pass into the afterlife until they’ve fully decomposed, so in the meantime, their loved ones continue to celebrate and connect with them.

For most of these cultures, there is a common belief that once we die, we travel to an afterlife or are reincarnated as a new being, and that therefore there’s cause for celebration. There’s also a sense that death is not an ending, and that it doesn’t necessarily mean the dead are gone and can no longer be reached. According to Buddhism, which has 520 million devotees worldwide (or seven per cent of the world’s population), death is simply the shedding of one skin in preparation for adopting a new one. One of Buddhism’s central principles is that everything is impermanent and that the sooner we accept this, the sooner we can end our human suffering. Far from being a taboo topic, Japanese people are taught about the reality of death when they’re children, and encouraged to accept mortality as natural. In our own country, there’s a belief that children need to be shielded from the painful truth of death, but this only delays an inevitable reckoning with an unavoidable part of life.

In some cultures, the treatment of death involves a focus on outward expression of emotion. At Chinese funerals, professional wailers are often hired to honour the dead and encourage guests to openly mourn. Indigenous Australian funerals (sometimes called “sorry business”) also often involve wailing (as well as special dances). On top of this, grief is shared by entire communities rather than just the immediate family so that the burden of grief doesn’t fall onto one small group, and community members drop what they’re doing to visit the family. The grieving period lasts for days or months, depending on the community. Aunty Margaret Parker from the Punjima people in north-west Western Australia explains that “The whole community gets together and shares that sorrow within the whole community.” It’s easy to forget, in a society that prioritises the individual over the collective, that we have strength in numbers.

Mourning in the Greek culture officially lasts for a 40-day period, in which close relatives stay home. In the Jewish tradition, the immediate family stays home for seven days and sits close to the ground as an expression of their sorrow (“sitting shiva”), and then there are 30 days afterwards where they can resume normal activities but not attend celebrations. This might seem macabre in some ways, but in other ways it allows time for loved ones to grieve and process their feelings without the external pressures of life.

By comparison, modern Western culture, with its fast pace, doesn’t often encourage us to stop what we’re doing to really feel and experience our emotions when someone passes away (even the expression “passes away” is a euphemism that avoids the word “death”). Our culture doesn’t provide much time for grieving, and instead, we feel an imperative to return to work as quickly as possible and to get back to being productive. We seem caught halfway between being able to accept and therefore celebrate a person’s departure from life, and being able to properly express our feelings about this departure.

So, what can we learn about how to do death better? We can talk about it, early and often, so that we don’t get blindsided when it happens. We can slow down our lives long enough to honour our feelings and to realise what’s important. We can remember the importance of community in shouldering our grief. And maybe, eventually, we can start to see the end of life not as an end, but as a new beginning, and we can rejoice even as we say goodbye to those we love.

This website uses cookies to improve your experience while you navigate through the website. Out of these, the cookies that are categorized as necessary are stored on your browser as they are essential for the working of basic functionalities of the website. We also use third-party cookies that help us analyze and understand how you use this website. These cookies will be stored in your browser only with your consent. You also have the option to opt-out of these cookies. But opting out of some of these cookies may affect your browsing experience.
Necessary Always Enabled
Necessary cookies are absolutely essential for the website to function properly. These cookies ensure basic functionalities and security features of the website, anonymously.
Functional
Functional cookies help to perform certain functionalities like sharing the content of the website on social media platforms, collect feedbacks, and other third-party features.
Performance
Performance cookies are used to understand and analyze the key performance indexes of the website which helps in delivering a better user experience for the visitors.
Analytics
Analytical cookies are used to understand how visitors interact with the website. These cookies help provide information on metrics the number of visitors, bounce rate, traffic source, etc.
Advertisement
Advertisement cookies are used to provide visitors with relevant ads and marketing campaigns. These cookies track visitors across websites and collect information to provide customized ads.
Others
Other uncategorized cookies are those that are being analyzed and have not been classified into a category as yet.
SAVE & ACCEPT